Mainstreet Equity has a number of Calgary apartment buildings situated along the newly established bike lanes. These lanes are designated roadways and individual lanes exclusively for bikers in Calgary's Urban areas. 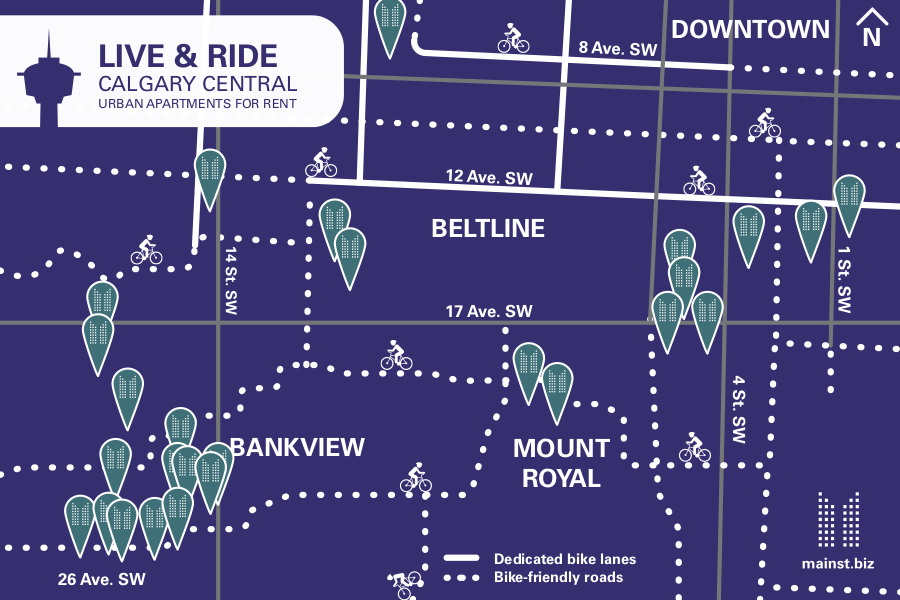 The co-existence of cyclists with vehicle traffic and pedestrians is a concern in all modern cities, and Calgary is no exception. One of the most popular and successful solutions to cycling traffic in populated cities are dedicated bicycle lanes. This guide will help you learn more about the history of Calgary's current bike lanes and how–and where–to use them.

In 2015, the Calgary Transportation Department launched a pilot program to test the success and traffic of new bicycle lanes in the city centre. These bicycle lanes would be cycle tracks, rather than standard lanes. Unlike a standard bike lane–which is marked off with painted barriers on the ground and is not separated from ordinary traffic–a cycle lane is a bike lane with a physical barrier that separates it from parked cars, sidewalks, and moving cars.

The lanes first opened in June of 2015 and were heavily monitored and studied in order to determine their efficiency, frequency of use, and the possible need to make the lanes permanent and/or expanded.

The results of this pilot program heavily indicated that the network was indeed a success. Daily trips tripled in between the first installation to the end of the pilot program, and cyclists traveling into and out of the downtown area increased by a stunning 40%. The Transportation Department also conducted an extensive telephone survey which found that 2/3 of surveyed Calgarians supported the new cycle track pilot program.

Due to the success, the Calgary City Council voted to make the pilot cycle tracks into a permanent bicycle lane system. Since then, work has continued to improve the functionality of the lanes, extend the lanes, and make the overall cycling experience safer for cyclists, pedestrians, and everyone who shares the city centre.

The pilot program uncovered many interesting statistics regarding cycling use in the city. The most notable of which are:

Calgary's current cycle tracks are located in the following areas:

Cyclists should note that cycling is legal on Stephen Avenue and the Olympic Plaza, though there are currently no cycle tracks in that location. Remember: always obey the rules of the road and do your due diligence to ensure you are following the law no matter where you cycle.

For more information please visit the City of Calgary Link