Recent reports regarding the Surrey-Langley SkyTrain look promising for residents in lower mainland BC and commuters, as the project is reported to be moving "quickly" and "on schedule." The timeline for this project has been a source of inquiry for the city since its inception, with many wondering how long it would actually take for the SkyTrain project to actually get underway and move towards completion.

However, the most recent report to the Surrey Council from the engineering department responsible for the project says that the project is moving forward quickly and promptly. This is partly due to the experience that the department gained through the construction of the Evergreen Skytrain, which provided valuable problem-solving and firsthand experience that is now being utilized in the Surrey-Langley SkyTrain project.

TransLink, the company behind the initial SkyTrain proposal, has already secured a qualified engineering team that is setting up the design requirements for the proposed SkyTrain track. This proposal includes the number of stations, the proposed location of stations, and the current proposal for guideway placement. This project is expected to begin construction in 2021 and the beginning of the service is expected to begin in 2025. This is, of course, assuming that the proposal is approved by the government in a prompt manner and that the TransLink requests for necessary qualifications and other procurement methods are approved within the scheduled time. For those unfamiliar with the SkyTrain project, it will be beneficial to cover some of the advantages that adding a SkyTrain to the Surrey-Langley route will bring to the region.

SkyTrain has been providing rapid transit in Metro Vancouver for more than 3 decades, providing over 80km of rapid transit on 3 separate lines; the SkyTrain allows for rapid connection between workplaces, residences, as well as downtown and other high-entertainment areas.

The Surrey-Langley SkyTrain will decrease commute times, connect the region with rapid transit, and help revitalize urban neighborhoods that were previously cut off from the region.

In addition to these advantages, SkyTrain helps reduce carbon emissions and helps protect the environment and improve the sustainability of the province of British Columbia; SkyTrain runs on electricity, has no operation emissions, and helps reduce the dependency on fossil fuels in the region through its electricity-powered transit method.

The current proposal for the Surrey-Langley SkyTrain Route will span 16 km and go from Surrey's King George Station, along Fraser Highway to 203 Street in the city of Langley. The line is expected to have multiple stops throughout the route, though the placement of where this line stops is currently under development and will likely be finalized only after careful analysis of the highest traffic and most in-demand stops along the route.

There is an increasing need for environmentally friendly rapid transit that will help decrease commute times, decrease congestion and improve the ability for people to get around in an increasingly interconnected world. As Lower Mainland BC and Vancouver expand in size and population the need for more efficient and effective transit is necessary to accommodate the boom.

The Surrey-Langly SkyTrain project is also expected to increase the surrounding property values. With accessibility to downtown Vancouver, the residence of Surrey and Langley will be able to more effectively commute to and from work.

The Surrey-Langley Skytrain will do more than just get people from point A to point B: it will improve the lives and wellness of the people that use it, enhance the community and benefit the metro area with an effective rapid transit system. 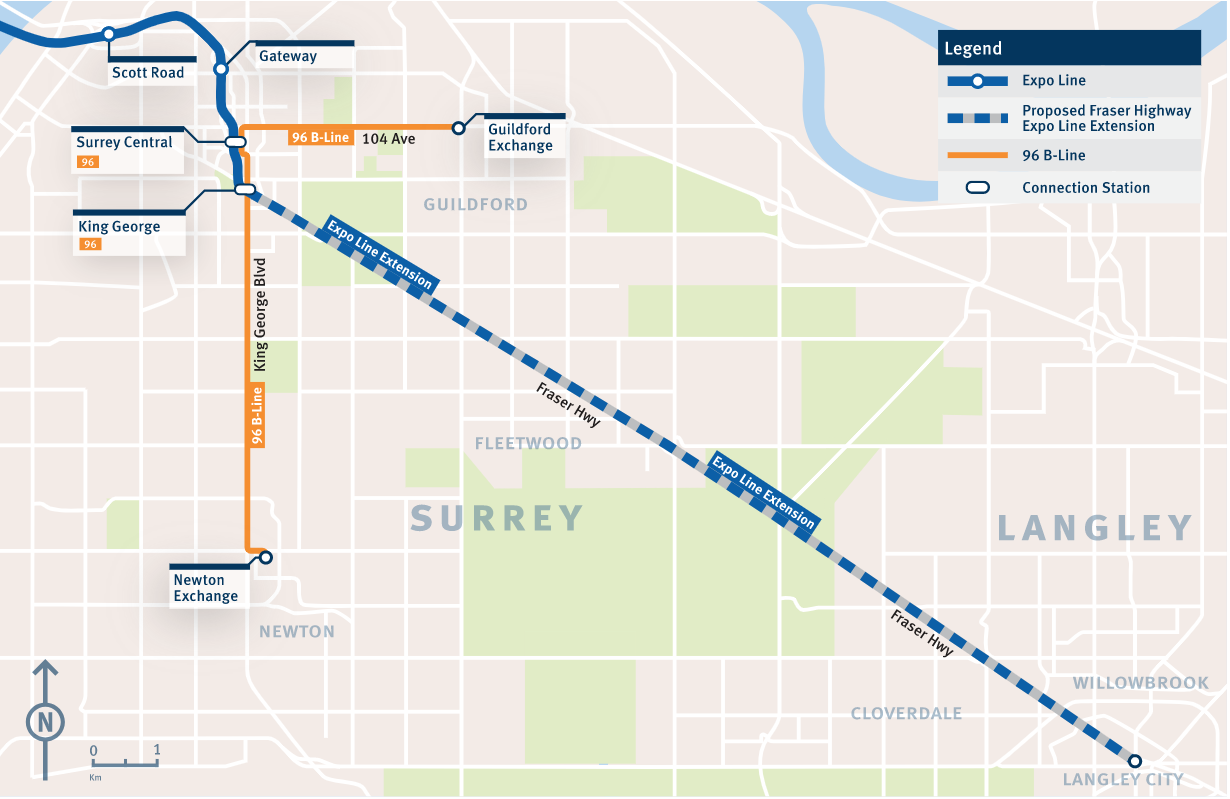 The SkyTrain that will link Surrey & Langley will decrease commute times. Further helping people living in the Urban areas connect, revitalizing the up and coming Lower Mainland BC communities.

The more people that use the SkyTrain and public transit, the fewer vehicles on the road, ultimately lowering traffic and congestion.

The SkyTrain project will help meet the ridership demand along key routes.

The SkyTrain system runs on electricity with no operating emissions. This ultimately reduces greenhouse gases and the dependence on fossil fuels to power private vehicles.

Improve transit to help facilitate sustainable regional growth. Surrey and Langley have seen surges in population. The SkyTrain line will aid in the continued regional growth and development.

The SkyTrain will use grade-separated tracks, and the travel times will remain consistent. Adhering to the highest levels of safety, the line will be a safe and secure way to travel. The reliability will also be a key benefit; TransLink's on-time performance rate for SkyTrain is 95% or better!